I found these lockers a few years back when on a road trip antiquing.  They were and a pretty beat up barn and very rusty.  Now, I love rusty and shabby, and we used these lockers "as is" for many years in the garage.  I wanted to clean them up a bit and paint them to continue to use in the garage.  The previous paint job had covered the original label and I was hoping I could restore that as well.
Hope you enjoy the restoration process as much as I did.
The perfect spot in the garage. 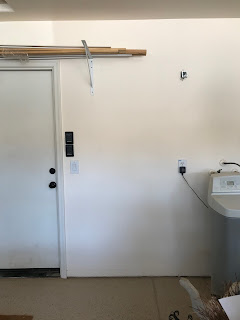 Time to clean up.
As with any restoration project the first part is the worst.  I want instant gratification and to just start spray paining.  But no.  I had to get all the prep work done.  Cleaning, vacuuming, and stripping some of the old paint off. (I wasn't too bent up on getting them stripped down to bare bone, because I do want to keep some of the shabby properties.  Also the rust was pretty thick, so I am embracing the shabby destiny of these lockers.) 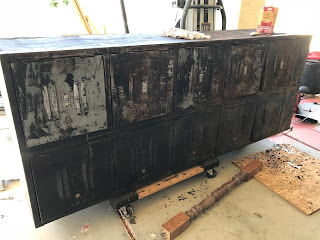 I was thrilled to see how easily the paint came off the labels and restored their original look without damaging the original paint.  I love the rusted look of the brad/rivets holding the label as well. 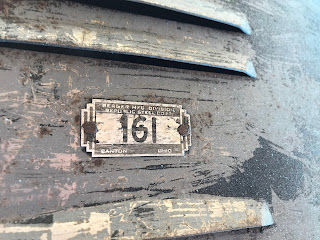 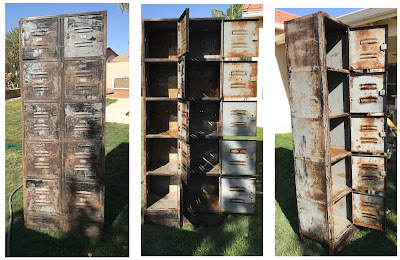 You can see there was a pretty significant amount of rust and also you can appreciate the original gray color.
Now it's time to let the paint SPRAY!!!! 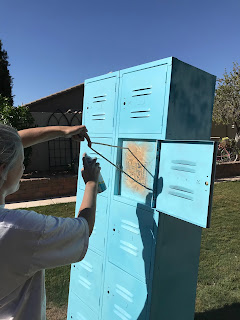 I fashioned a pice of wood that I could use to block off overspray of the exterior.  I made the height tall enough to overlap the edge and the sides were a few inches short (to actually get it in the locker) and moved it side to side when spraying.  I drilled a hole in each corner and used some scrap rope to hold the wood in place.  Did not want to have to worry about taping every locker off. Smarter, not harder.  :)

--My only complaint with the Rustolium paint was that some cans would not spray evenly, no matter how long I shook the can.  The first few minutes of spraying would have spots of darker color.  Go figure.

Step by step image of the transformation: 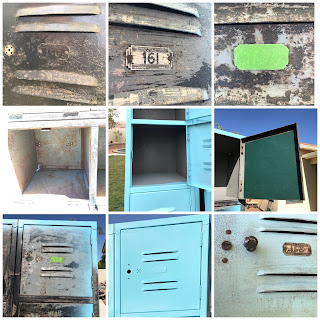 The gray interior was painted first and left to dry.  It locks were removed and the labels were taped off and fist to size with an exacto knife.  Note the green scrapbook paper that I taped on each door to prevent overspray at the lock hole and vents.  Painters tape and moving it to each door as I sprayed minimized the touch up later on.

Antiquing: To antique I use the Kryolon Wax Coating Chalky Finish, Dark brown.  Thinly sprayed in directly on the lockers and wiped it down with a clean white cotton cloth. A little paint thinner was used in the end to clean up thicker areas if needed. 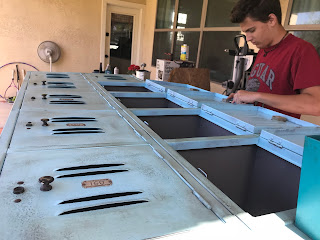 I enlisted the help of my mechanically minded son to help re-install the locks.  A couple of the locks were permanently in the locked position and those doors would not close all the way. We decided to remove all the locks rather than tape them and then after fixing the 2, we reinstalled them and it was nice to have the rusty screws and locks. I have 8 of the original knobs that were also replaced, now I will just have to find similar replacements for the top 2 lockers. Love how they turned out and the function they bring to the garage. 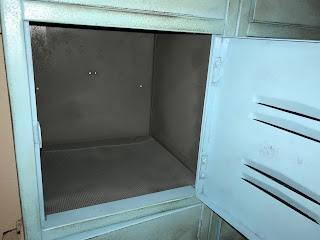 A little cleaner storage area and a clear rubber shelf liner was added. 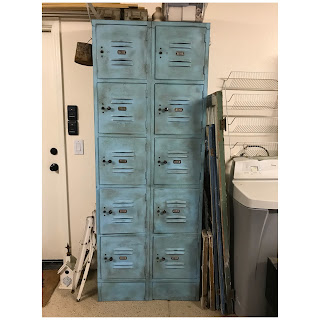 Erika
For 12 years I had to opportunity to stay home with my children while they were little. During that time this blog was born. I was able to share some of my experiences and help others DIY their way into home improvement and empowering themselves to say, "I can do that!" At a pivotal time I decided to go back to school and spent 5 years focusing on that next stage in life. I have reached my education goals and have found a career that I love! This now gives the me freedom to be with my family and to get back into my hobby of home improvement! I will slowly share some of my newest endeavors and hopefully give some ideas to inspire others. I try to not be too wordy and my pics will be from my iPhone. I don't do photo shoots. I try to keep it real. Enjoy. I am more active on IG, user name Shab_e_thing. feel free to follow along there until I get more time to blog. 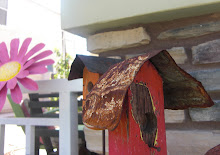 Click on one of these Labels to find what you are looking for: 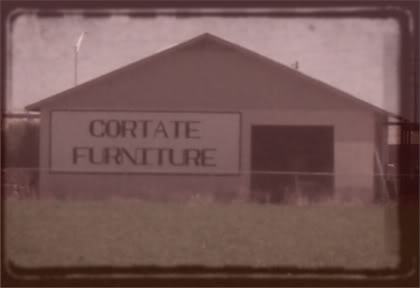 The Best Place to Buy Furniture

Who loves the shabby thing???